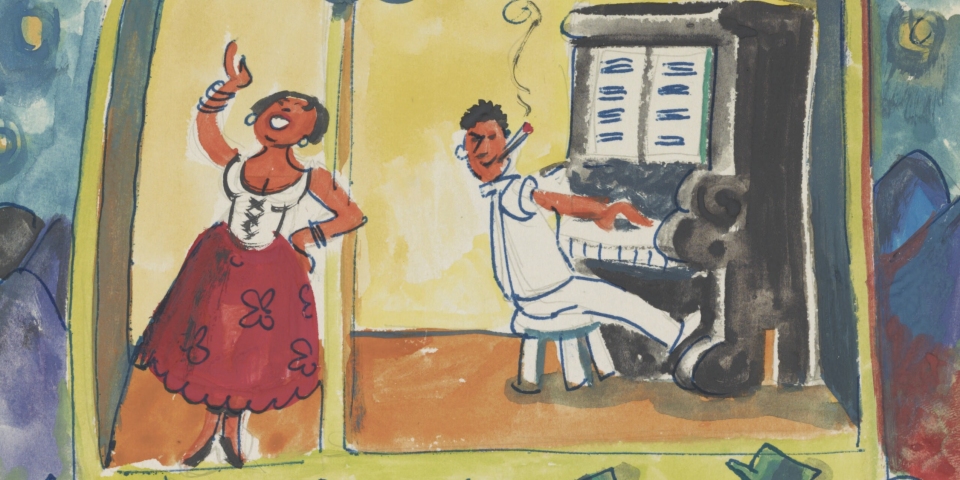 The sabra is a cactus-type plant with tough thorns on the outside and sweet flesh inside. In common usage, it is applied to native-born Israelis. The Sabras in this piece are: 1) Ilana, the Dreamer; 2) Idele, the Hassidele (little Jew, the little Hassid); 3) Yosi, the Jokester; and 4) Dina, the Tomboy Who Weeps Alone.

On the cover page of the original manuscript, the title is given as Six Sabras, with an indication of two possible additions—a kibbutznik (member of a collective agricultural settlement) and an [Israeli] boy scout, without names—but these two pieces were not composed. Some detective work has been necessary in order to determine even the approximate date of composition. The title page is stamped Israeli Music Publications (IMP), suggesting that the piece might have been requested by that publisher—possibly as a set of children’s piano pieces—or, conversely, that it was simply a handy piece of paper found by Bernstein when he was conducting in Israel in 1948. He was there again in 1950, briefly in 1953, and then not until 1957. In any case, it can be established that these vignettes were written prior to 1956, since lIana, the first portrait, became “Candide’s Lament” in Bernstein’s celebrated score for Candide. (It was also known as a piano piece written for an anniversary occasion for a friend, Cesarina Riso.) No. 2, Idele, recalls Mussorgsky’s Samuel Goldenberg and Schmuyle, from Pictures at an Exhibition. Bernstein’s version of Samuel Goldenberg is a rav—a rabbinical-type teacher who Talmudically intones lessons to Bernstein’s version of Schmuyle—known as Idele (Yudel, the name of Bernstein’s paternal grandfather). Idele is otherwise distracted—i.e., the pianist’s right hand—while the rav continues to drone on in the left hand. No. 3, Yosi, may refer to a friend of Bernstein’s, Yossi Stern, an Israeli artist known for his incisive cartoons. The rhythms are reminiscent of the “jump” sequence from West Side Story’s “Dance at the Gym.” The middle lento section of No. 4, Dina, found a later echo in the score for On the Waterfront.

Page from Letter to Jennie Bernstein from LB while in Israel, illustrated by Jossi Stern 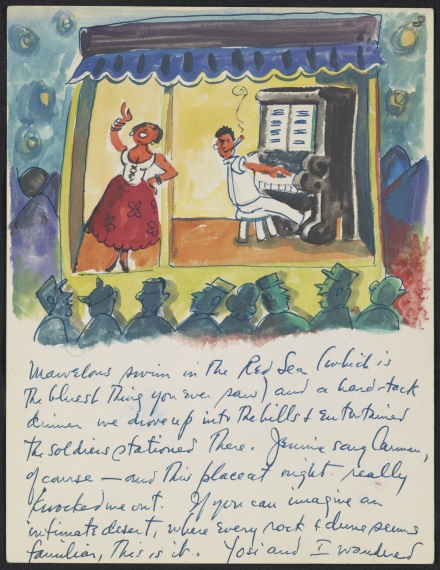 Four Sabras: I. Ilana, The Dreamer