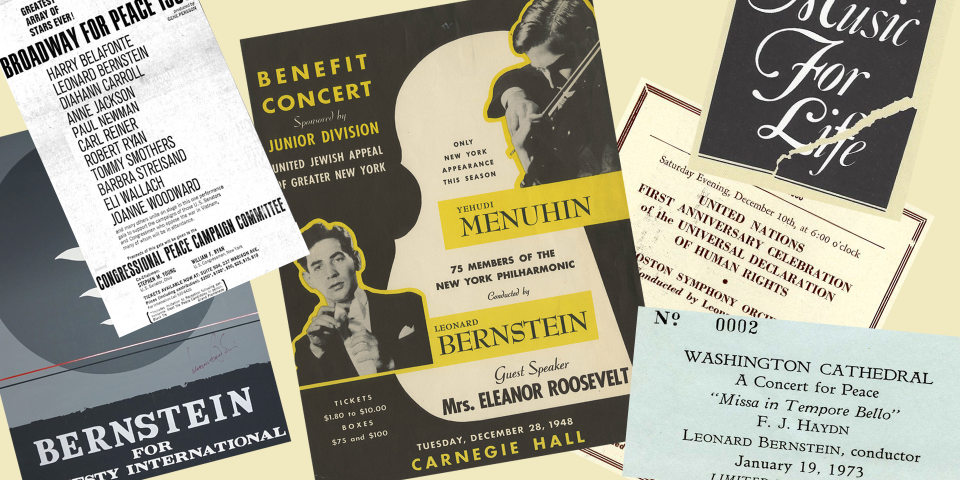 My father, Leonard Bernstein, grew up in a world of stark political contrasts. From the Depression to Roosevelt and the New Deal, from Nazism to World War II and the dropping of the atom bomb on Hiroshima, young Bernstein witnessed a world full of evil that was occasionally tempered by powerful forces of good. In the mid-1960's, just as life and public justice in America seemed to be making some progress, Bernstein and his contemporaries found themselves swept up in the upheavals of three devastating assassinations: President John F. Kennedy in 1963, and then five years later, Rev. Martin Luther King and President Kennedy’s brother, Robert F. Kennedy. And then there was yet another long and wounding war, in Vietnam.

Through it all, my father clung hard to the belief that by creating beauty, and by sharing it with as many people as possible, artists had the power to tip the earthly balance in favor of brotherhood and peace. After all, he reasoned, if humans could create and appreciate musical harmony, then surely they were capable of replicating that very same harmony in the world they lived in.

Leonard Bernstein was not shy about sharing his political beliefs with the world. Nor was he afraid of the various epithets — liberal, Jew, antiwar, radical chic, commie-pinko-queer — which over the years stuck to him like burrs on his coattails. He spoke out and fought doggedly for the causes he believed in. He donated fees, wrote letters and campaign songs, even entire musical works, in order to communicate his fervent hope for a better world.

And no, Leonard Bernstein did not always act prudently. His passion sometimes got the best of his logic. But when he conducted Beethoven's Ninth Symphony in Berlin on Christmas Day, 1989, to celebrate the fall of the Berlin Wall, the feeling that he had attempted to convey all his life was at its most palpable: that if enough hearts would open themselves to the beauty of great music, there would be no room left in any of those hearts for evil, greed or hate.

Shortly after President Kennedy's assassination, my father said: "This will be our reply to violence: to make music more intensely, more beautifully, more devotedly than ever before." Since that time, there have been all too many occasions on which to cite that quotation again. Yet each time it is reprinted or uttered, that statement provides the same gleam of comfort and all-embracing optimism that my father conveyed to the world during his lifetime, through his every note and act.

AIDS Awareness and Funding for Research Bernstein and AmFAR "Most importantly, 'Serenade' raised the first million dollars for AmFAR's community - based clinical trials program, which went on to create a nationwide network of 45 cooperating HIV/AIDS clinical research centers." An Artist's Response to Violence Bernstein said of Kennedy, “Of all the political men that I have ever met, [he] was certainly the most moving and compassionate and lovable.” Disarmament Activist Commencement Speech at Johns Hopkins (1980) "Every artist copes with reality by means of his fantasy. Fantasy, better known as imagination, is his greatest treasure, his basic equipment for life. And since his work is his life, his fantasy is constantly in play. He dreams life." Human Rights Activist Leonard Bernstein and the United Nations Human Rights Activist Leonard Bernstein and Amnesty International Radical Chic Flap The New Yorker The Bernstein Files By Alex Ross WQXR Blog Blacklisted: The Political Life of Leonard Bernstein By James Bennett II WQXR Features Leonard Bernstein's Black America Aspen Times Man on a Mission
Come On, Deliver...
the latest Leonard Bernstein news... to me!