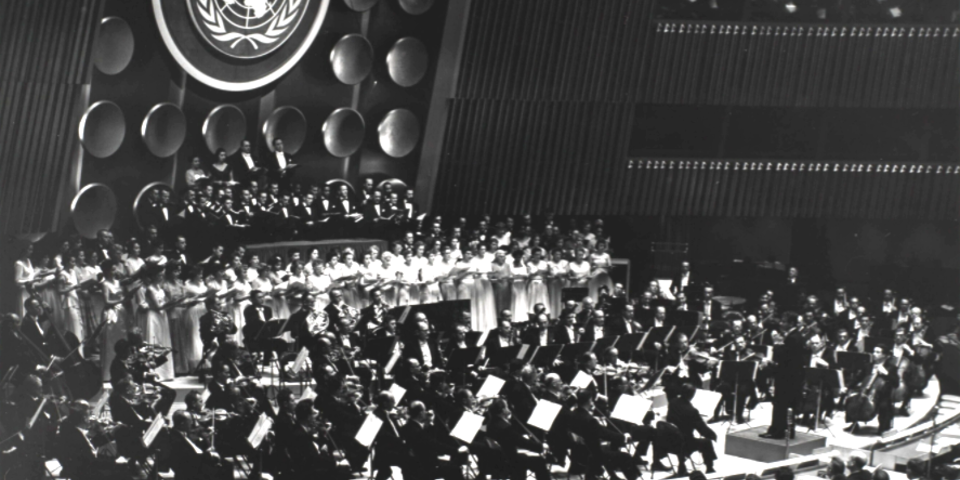 Leonard Bernstein and the United Nations

2020 marks the 75th Anniversary of the United Nations, founded in 1945 to support international collective action to realize peace, development, and human rights for all. Its Charter gives the United Nations the power to take action on many global issues, including security and peace, climate change, human rights, nuclear disarmament, humanitarian and health emergencies, and so much more.

A lifelong humanitarian, Leonard Bernstein was continually involved with the most pressing social issues of his day, often aligning himself with the work the UN was established to do. Over multiple decades, he conducted several UN-related concerts, namely in celebration of United Nations Day on October 24th and Human Rights Day on December 10th.

Bernstein’s engagement with the United Nations began on December 10, 1949, when he conducted the Boston Symphony Orchestra at Carnegie Hall, in celebration of the one-year anniversary of the United Nations General Assembly’s ratification of the Universal Declaration of Human Rights: a milestone document proclaiming the inalienable rights which everyone is inherently entitled as a human being. The concert included an address by Eleanor Roosevelt, first chair of the UN Commission on Human Rights, in which she affirmed that the Declaration “will be one of the foundations on which the peoples of the world may build peace.” Televised by NBC, the concert marked many historical firsts: Bernstein’s first television appearance, the Boston Symphony Orchestra’s first television broadcast, and the first program to be televised from Carnegie Hall. The program began with the world premiere of Aaron Copland’s “Preamble” with Sir Laurence Olivier narrating text from the Universal Declaration of Human Rights. Bernstein also performed Ravel’s Piano Concerto in G, conducting from the piano, and led soloists Irma Gonzalez (soprano), Elena Nikolaidi (mezzo), Raoul Jobin (tenor), Nicola Moscona (bass), and the Collegiate Chorale in the monumental “Ode to Joy” from Beethoven’s Symphony No. 9. 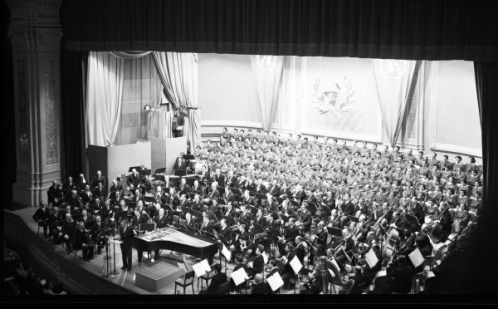 Nine years later, in his first year as Music Director of the New York Philharmonic, Bernstein conducted the orchestra in the 1958 Human Rights Day Tenth Anniversary concert, this time at the United Nations General Assembly Hall. began the program with Leonore Overture No 3, the most famous of the four overtures Beethoven composed for his only opera, Fidelio. It was an appropriate choice for the occasion, as the story of the opera describes a heroic struggle for freedom. The concluded with Prokofiev’s Fifth Symphony, another fitting work for the occasion, as Prokofiev composed the work in 1944 amidst the turbulence of WWII. He stated at the time that he intended the work as “a hymn to free and happy Man, to his mighty powers, his pure and noble spirit.” 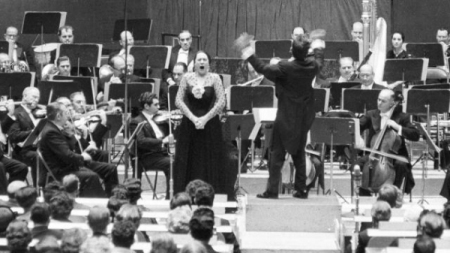 This concert was the second time in just over a month that Bernstein had contributed his talents to the UN. In November of 1958, Bernstein won wide acclaim for his performances with the Lamoureux Concert Association Orchestra, marking the dedication of the new headquarters in Paris of the United Nations Educational, Scientific, and Cultural Organization (UNESCO). Bernstein also supported the work of the United Nations Children’s Fund (UNICEF), and in 1968, he accompanied baritone Dietrich Fischer-Dieskau at a special benefit concert for UNICEF at Lincoln Center’s Philharmonic Hall. Their performance of Lieder by Gustav Mahler was recorded by Columbia Records.

Leonard Bernstein, with the New York Philharmonic, marked two important anniversaries of the founding of the UN. Their October 24, 1955, concert, marking the UN’s Tenth Anniversary, was the New York Philharmonic’s first appearance at the grand United Nations General Assembly Hall. A broad apron stage was added to what is normally the speaker’s rostrum to accommodate the Philharmonic, and the seats of the General Assembly were filled with delegates to the General Assembly, eminent guests, and members of the UN Secretariat. The program opened with Sir William Walton conducting his March composed for the 1937 coronation of King George VI and Queen Elizabeth. Following addresses by Dag Hammarskjöld, Secretary-General of the United Nations, and Jose Maza of Chile, Bernstein conducted Tchaikovsky’s First Piano Concerto with Russian pianist Emil Gilels, who was the first Soviet artist in twenty-four years to make a concert tour of the United States. The program ended with the “Kyrie” and“Gloria” from Beethoven’s grand Missa Solemnis, for which the Philharmonic was joined by Schola Cantorum and soloists Adele Addison (soprano), Eunice Alberts (mezzo), Ernest McChesney (tenor), and Norman Scott (baritone). The concert was televised by WOR-TV of the Mutual Broadcasting Network and broadcast by WQXR and WNYC. 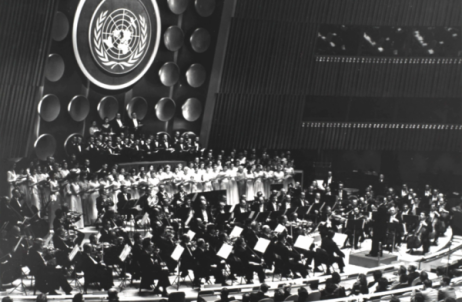 The New York Philharmonic returned to the UN General Assembly Hall for a concert celebrating the 20th Anniversary of UN Day, on October 24, 1965. For the occasion, the Secretary-General invited the eminent British composer Benjamin Britten to compose a work. Britten’s Voices for Today, an Anthem for Chorus (men, women, and children), received its premiere at this and two other concerts held simultaneously by ensembles in London and Paris. Russian composer Dmitri Shostakovich was also asked to compose a piece for the event; however due to illness, he was unable to complete it. Bernstein, instead, chose to program Shostakovich’s Ninth Symphony, which the Philharmonic was preparing for upcoming concerts. Choosing to end the program once again with Beethoven’s “Ode to Joy,” Bernstein enlisted soloists Martina Arroyo (soprano), Regina Resnik (mezzo), Jon Vickers (tenor), and Justino Diaz (bass), as well as Schola Cantorum. With its rousing message of universal brotherhood, Beethoven’s Ninth Symphony would continue to be a means to communicate unity for Bernstein, most notably in the historic performance in Berlin to celebrate the fall of the Berlin Wall.

Between these two momentous performances, Bernstein, early in his tenure as Music Director of the New York Philharmonic, dedicated a subscription concert on October 24, 1959, to United Nations Day on the 14th anniversary of the founding of the UN. The concert, held at Carnegie Hall, included Barber’s Second Essay for Orchestra, Ives’s Unanswered Question, Stravinsky’s Concerto for Piano and Wind Orchestra with soloist Seymour Lipkin, and Berlioz’s Romeo and Juliet. The CBS radio-broadcast of the concert included an address by Ambassador Henry Cabot Lodge.

Human Rights Day continues to be celebrated every year on December 10th, celebrating the 1948 signing of the Universal Declaration of Human Rights. Available in more than 500 languages, it is the most translated document in the world. To mark their 75th Anniversary, the United Nations has launched the UN75 initiative, seeking to spark dialogue and action building on the founding principles of realizing peace and human rights for all.