From the Archives: LB: The Tanglewood Rituals

One magnificent shrug of the shoulders, eyebrows raised -- and they were off! The Tanglewood Music Center Orchestra was again playing beyond its years, as if their lives depended on it. A singular moment, poised in time? Yes, but – miraculously – that singular moment was repeated every summer, as Leonard Bernstein made his yearly visit to Tanglewood.

Tanglewood! What a complicated place for him. His personal history there; his complex relationships with Tanglewood founder, Serge Koussevitzky; with friend and mentor Aaron Copland; with Gunther Schuller and Seiji Ozawa; with members of the Boston Symphony Orchestra, some of whom he’d known for fifty years – and the place itself: surely a numinous, sometimes fraught, presence in his life. The Theater Concert Hall, the Shed, the lake, the lawn, Seranak – memories everywhere, but the living energy of the place seeming always to revive and exhaust him at the same time. So much was asked of him. How much could he give in those short weeks? He needed to touch it all, to give everything, and so, across many years, his time at Tanglewood came to seem an enactment of rituals. 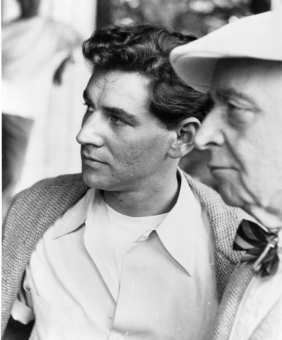 RITUAL #2: The Arrival.
For many years LB’s preferred dwelling was the Aviary at Wheatleigh, a romantic three-story tower near the Tanglewood campus (although sheer hell on piano movers). Upon arrival, Dan Gustin, Manager of Tanglewood, and I would present ourselves to the Maestro and his business manager, Harry Kraut. (Kraut had been a Tanglewood manager and, at one time, was Dan’s boss.) We had the required measure of good scotch in hand, for a wonderful long evening – during which, infuriatingly, invariably, the entire rehearsal schedule so painstakingly worked out six months earlier would be upended. Days before launching into the most complex weeks of the summer, things just had to change. (There was something Puckish in his casual disruption – a hint of a smile, a small glint in his eye as we tore our hair...)

RITUAL #3: The First Rehearsal.
The Tanglewood Fellows had been waiting for this moment the entire summer (perhaps their entire lives). The Maestro’s habit was to drive right through the Main Gate (an activity forbidden to mere mortals) in a champagne-colored, vintage Mercedes convertible: a tank of a thing, top down, assistants rampant, and going just a little too fast. (There’s Puck again, courting the scandalized looks of his contemporaries: had enough time passed? Was it actually OK for a Jew to drive a Mercedes?)

The TMC Orchestra was on stage, tuned. Backstage, the stage crew, staff, student conductors, BSO principals, old Lenox friends lined up to greet him. With very little fuss, up onto the podium, a few kind words to the orchestra – about Tanglewood, about “Koussy,” about the piece they were going to perform – and it began. From the first notes, the music-making was electric, transformational. White hot Berlioz; celestial, wrenching Tchaikovsky – insisting that the orchestra live the passions of Romeo and Juliet, right there, in that moment!

RITUAL #4: Meeting the Young Conductors.
Late afternoon, driving up the hill to Seranak, Koussevitzky’s stately home above Tanglewood – a place he had been so many times before, as student and teacher... taking his seat, he would meet that summer’s four Fellows and the fifteen-or-so Seminar members. He truly loved his one-on-one meetings with the Fellows, plumbing the depths of their repertoire for the concert – but he didn’t love those classes. Hardworking, over-eager young talents in the Seminar: terrified, awe-struck, mesmerized, knowing he would catch every technical error... it was frankly boring for him. They wanted technical critique, and he was far more interested in the music itself. 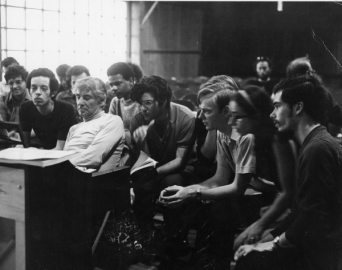 The little Composers’ Cottage on the Seranak grounds was decidedly funky. (Composer Oliver Knussen dubbed it “Woodchuck Villa.”) The Maestro would arrive late, often after a BSO concert, and the composers were nervous. Uh-oh: they had heard about The Kiss. This ritual – a big, sincere kiss and bear-hug for each of the young composers, lined up for his arrival – well, how on earth were they to react? Finally, after more wine, and kindly talk of their origins and teachers, he would settle in to look at scores, and there was serious talk – late, late, late into the night, heedless of the next morning’s rehearsal schedule. He might offer some praise, some gentle rebuke or “this doesn’t work” (devastating), but, oh, the feeling that they had been by this man, who stood in the lineage of Beethoven and Mahler!

RITUAL #6: Performing with the BSO.
Backstage, a final gulp of water, a surreptitious kiss of Koussy’s cufflinks (he was never without them when performing at Tanglewood, or anywhere else), and in the next moments the players were transformed, inspired – this too was an annual miracle. Towering performances of the core repertory, every summer: the orchestra at first tired, perhaps a bit cynical – after all, this was usually mid-August, by which time the BSO had performed an astonishing 18 different programs for a dozen conductors since early July.

His conducting was legendary, of course: the hypnotic spell of his full concentration, that deep and uniquely personal sound from the orchestra - it was well chronicled, fully expected, and yet truly epochal, every time. The larger-than-life gestural language, the whole-body evocation of the inner soul of the music, the incredibly expressive face and eyes; and then - when and as needed - perfect technical control, incredibly tight rein on the orchestra: his legacy from Reiner.

RITUAL #7: Time for Family.
What a privilege occasionally to be included around that table! The word games (each feeling like a test); the quicksilver literate jokes and allusions; the sweet tenderness of his regard for his kids. No matter the pressures of his Tanglewood weeks, family was the place where he could exhale, and laugh.

RITUAL #8: Teaching.
While every facet of LB came alive at Tanglewood, I think he enjoyed nothing so much as teaching. His style was Socratic – never a lecture, always beginning with a question (“Why on earth do you think Brahms put that rest there?”), or a challenge, underpinned by frighteningly encyclopedic knowledge of all of music: opera, the symphonic repertoire, the song repertoire, chamber music, the solo piano literature, music of every historical era, the lives of composers, the sociology of their times, everything! And poetics, critical theory, ethics, history, languages (God, how he loved language!), puns, bad jokes.

RITUAL #9: The Concluding Concerts.
First, a glorious afternoon concert of the TMC Orchestra – the yearly Koussevitzky Memorial Concert: the weather hot, the lawn packed, and surely the apex of the students’ summer at Tanglewood. And then, a few nights later, an intensely emotional Boston Symphony concert. 18,000 people in attendance, the maximum allowed by the Stockbridge police. These were the concerts we still talk about. 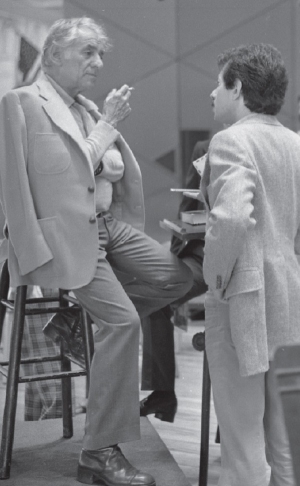 August of 1990. That final concert was meant to be a semicolon, to be followed by the first-ever European tour of the Tanglewood Music Center Orchestra. One of that summer’s Conducting Fellows – the young Marin Alsop – was to share the podium with him. Heartbreakingly, due to the Maestro’s ill health, the tour had to be cancelled five days before departure. And so we were left with that final Sunday afternoon BSO concert – what turned out to be his last Britten Sea Interludes, his final Beethoven Seventh – after which an incomparable Tanglewood presence for 50 years became one of its great luminous legends. Lucky we, who got to be part of the Tanglewood fabric in those years!

Richard Ortner, former President of Boston Conservatory, was instrumental in creating the merger with Berklee School of Music.