From the Archive: Bernstein Meets Broadway

Bernstein Meets Broadway
(as printed in the 2014 Fall/Winter issue of Prelude, Fugue & Riffs) 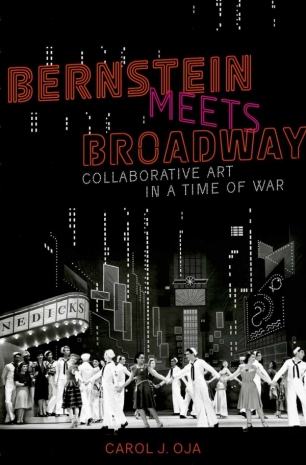 Carol Oja’s Bernstein Meets Broadway: Collaborative Art in a Time of War has recently been released by Oxford University Press. Oja chronicles the earliest professional adventures of Leonard Bernstein, Betty Comden, Adolph Green, and Jerome Robbins by zeroing in on Fancy Free and On the Town from 1944. She also explores the work of The Revuers, Comden and Green’s early sketch comedy team, for which Bernstein was an occasional pianist. A central theme in her book focuses on the racial desegration of Broadway musicals. Following are a few excerpts.

Chapter 5. Desegregating Broadway: On the Town and Race (pp. 154-55)
While On the Town resisted racial and ethnic stage practices of the mid 1940s by featuring Japanese American dancer Sono Osato, it also made a strong statement by hiring African Americans to play fullfledged citizens who were portrayed equitably with their white colleagues.

The show responded to a movement on the part of civil rights organizations to promote mixedrace casting and non-stereotyped racial representation, and individual choices about how to deploy black actors on stage shifted as the show took shape. African-American dancers – or “colored” dancers, as language of the day put it – were written into draft scenarios, but racial designations were eliminated when the script was finalized.

As a result, race primarily played out through casting and staging, all of which was implemented with little fanfare. Four blacks appeared in the show’s dancing chorus, and there were two black singers, adding up to 6 African Americans out of a cast of 54 — that is, 11 percent. Plus, Everett Lee, an AfricanAmerican violinist, played in the pit orchestra, and nine months into the show’s run, he took over as conductor, marking another racial breakthrough.

Chapter 2. From Nightclubs to Broadway: The Revuers, Comedy Skits, and Left-Wing Politics (pp. 57-58)
During the 1938-39 season, when The Revuers enjoyed their first flush of success, they were described as being young and “a little amateurish.” In part, the Village Vanguard’s cramped and “not-too-sumptuous” basement performance space imposed constraints. The Vanguard was “a dump,” as one critic indelicately put it. Their skits were essentially mini-productions, presented “on a packing-box stage before a sixfoot home-made backdrop,” reported Otis Ferguson in The New Republic. In September 1939, The Revuers moved to the stylish Rainbow Room at the top of Rockefeller Center, and that same fall, Bernstein began a master’s program in conducting at the Curtis Institute of Music in Philadelphia. “We began in the cellar — the Village Vanguard — and in less than six months we were up 65 floors atop the glamorous RCA building in the magnificent Rainbow Room,” Green later recounted with dramatic flair. “And less than a year after that, we were back at the Village Vanguard.”