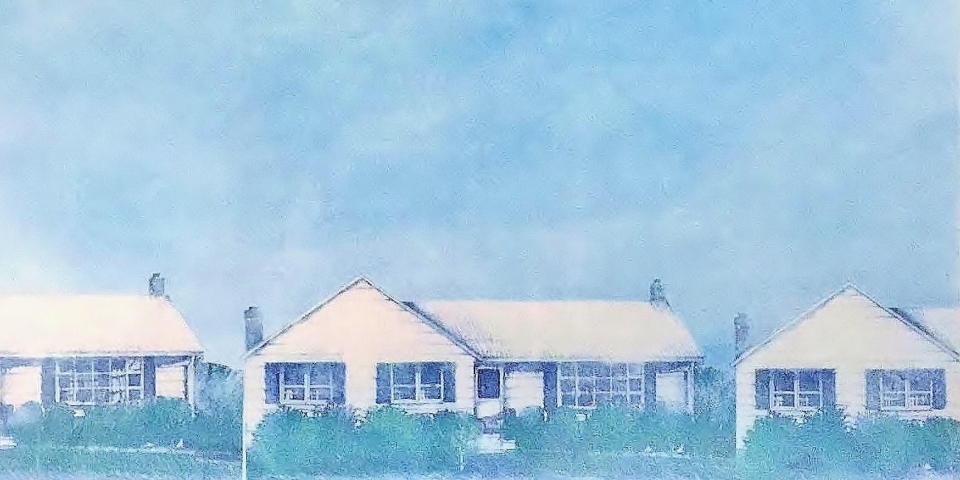 by Leonard Bernstein and Stephen Wadsworth

When comparing Leonard Bernstein's two operas, Trouble in Tahiti (1951) and its sequel, A Quiet Place (1983; rev. 1984), one can reflect on the vast changes in the American cultural landscape between the 1950s and the 1980s. Trouble in Tahiti was Bernstein's satirical caricature of 1950s American suburban life, gently exposing the illusion of contentment through its candid depiction of a couple's failing marriage; however, A Quiet Place examines the same family, three decades later, through a darker and more emotionally wrought lens. What was satirical, melodic, and jazz-inflected in the earlier chamber-opera became deeply psychological and percussive, moving fluidly between tonality and atonality.

A Quiet Place tells the story of a contemporary American family struggling to connect, forgive, and accept one another's differences after the death of a loved one. They all yearn for and remember moments of intimacy, but struggle desperately to achieve it in the present. This is presented musically by repurposing musical and dramatic motifs from Trouble in Tahiti, and though often dark and emotionally searing, A Quiet Place is interspersed with moments of communion, and ultimately ends on a hopeful note with a promise of reconciliation.

In 1980, Bernstein discovered that a 30-year-old writer named Stephen Wadsworth had a similar idea of writing a sequel-opera to Trouble in Tahiti, so they began working together to achieve their common goals. On a personal level, they felt a need to write about death and loss; Bernstein's wife Felicia had died of cancer two years earlier, and Wadsworth's sister Nina had been killed in a tragic car accident only one year before. Artistically, they wanted to write an "American" opera—a through-sung musical drama that would use vernacular speech and music to explore American middle-class problems by drawing upon the American musical theater tradition in addition to contemporary opera.

A triple commission from Houston Grand Opera, the Kennedy Center, and La Scala, A Quiet Place premiered in Houston on June 17, 1983, as a two-hour, one-act opera that followed Trouble in Tahiti on a double bill. The reviews were mixed and extreme. Some critics rejected the unusual subject matter and hybrid form, while others lauded the work for its musical sophistication and inventiveness. After the premiere, conductor John Mauceri urged the writers to re-conceive the relationship between the two works, and in the year that followed, Bernstein and Wadsworth trimmed parts of the original A Quiet Place and interpolated the 40-minute Trouble in Tahiti into the new work as two flashback scenes.

The revised version—now a three-act opera containing all of Trouble in Tahiti—creates a more immediate dialog between past and present, the original musical motifs, and their reprises. The revised A Quiet Place premiered at La Scala in June 1984, conducted by Mauceri and directed by Wadsworth. The production was very well-received in Italy before moving to the Kennedy Center the following month, and the opera was subsequently performed in Austria, Germany and the Netherlands. It has not, however, been staged professionally since Bernstein's death in 1990.

It may be that A Quiet Place was simply ahead of its time. As Bernstein said of his only full-length opera and final stage work, "It sounds like no other work by me or by anybody else I know of . . . It has a special language and sound all its own. The American language has never been treated in this particular way before." However, much has changed in American opera since 1984. Crossover works that blend a variety of musical styles and explore contemporary subject matter are now much more common. In this new environment, A Quiet Place finally enjoyed its New York Premiere in 2010 with the New York City Opera's production, directed by Christopher Alden and conducted by Jayce Ogren, and continues to intrigue audiences through its musical and psychological complexities.

Throughout the Leonard Bernstein Centennial, A Quiet Place received 40 performances by opera companies in Austria, Germany, Hungary, the Netherlands, and the US.

Sam's wife Dinah has recently been killed in an alcohol-induced car crash.

Their two grown children, Junior and Dede, return home for their mother's funeral with Dede's husband (and Junior's lover), François. Sam has been estranged from his children for many years—Junior, who is mentally ill, had fled to Canada to dodge the Vietnam draft, and Dede and François live with him there to care for him. After the service, Sam excoriates the three of them, venting his anger, sorrow and confusion in a blistering, wrathful aria ("You're Late").

Junior, confronted by his father's anger, loses all self-control, stripping off his clothes burlesque-style and accusing his father of killing his mother ("Hey big daddy"). They come to blows over Dinah's coffin, which crashes shut. Sam storms out, followed by Dede and François. Junior, alone, looks over the wreckage of the funeral as an orchestral Postlude, perhaps the most yearning, searching, searing music Bernstein ever wrote, closes the act.

Later that night, Sam reads in Dinah's diaries of her unhappiness and despair, and her anger towards Sam. Nevertheless, he misses her. In a flashback of their lives thirty years ago, Sam and Dinah fight - he escapes to his office and she to her analyst, where she relates a dream of being trapped in a dead garden, but hearing a voice telling her of another garden where 'love will lead us to a quiet place' ("There is a Garden"). Dede enters, ending Sam's reverie, and together they go through Dinah's closet: Dede tries on Dinah's dress and Sam is stunned at the resemblance - father and daughter finally connect with one another.

Meanwhile, François confronts Junior about his outrageous behavior at the funeral parlor. Junior has a psychotic episode in which he imagines his father shooting him as a child, and taunts François, claiming that Dede will always belong to him alone. François gets Junior into bed and asleep, and he and Dede meet outside where he sings her a passionate aria about how much she means to him ("I've Been Afraid"). More memories are triggered for Sam. In another flashback, Young Sam, having won a handball trophy at the gym, sings a virile aria, "There's A Law", about winners and losers, putting himself squarely in the former category. Meanwhile, Dinah goes to the movies and sees a terrible musical, which she mocks in the bravura aria "What A Movie". At home later that night, the two are unable to reconcile. After faltering, half-hearted attempts at addressing the widening gulf of silence and resentment between them, Sam suggests they go see a movie – "something about 'Tahiti'". As Dinah dresses to see the same terrible film she saw just a few hours ago, they mourn the magic lost between them, now available only on the silver screen. Back in the present, Sam watches over his sleeping son, unable to bring himself to kiss him goodnight.

The next morning finds Dede weeding her mother's garden ("Mommy, are you there?"), and she and Junior play games from their childhood. François and Sam enter and join in. At the height of their game of tag, François hurtles into Sam's arms – Sam embraces him and welcomes him to the family. Sam reads passages from Dinah's diary, including one in which she expresses her love for her family and wishes that they could learn to accept one another. Moved, Dede suggests they might stay on with Sam a few days – but they lose the thread of the tentative happiness they'd found as a discussion of who will sleep in which room becomes another fight. Dede starts to run off and Junior tosses Dinah's diary into the air. Junior tells Sam "it hurts so much to mean so much to you" and Sam finally embraces his son. François in turn reaches out to Dede, who takes a tentative step towards him as the curtain falls.

The opera is available in its revised 1984 entirety or as an edited, reduced-orchestration.

Orchestral Suite from A Quiet Place
(arr. 1991) 25 min.
arranged for orchestra by Sid Ramin and Michael Tilson Thomas with assistance of Michael Barrett

To purchase A Quiet Place, please visit our store. 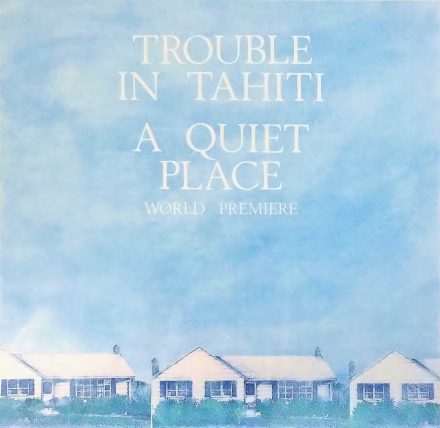 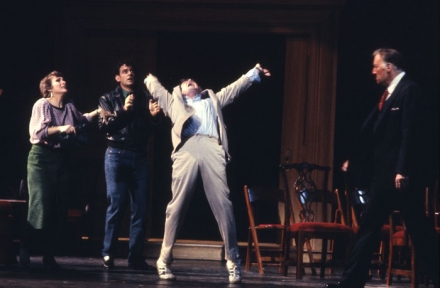 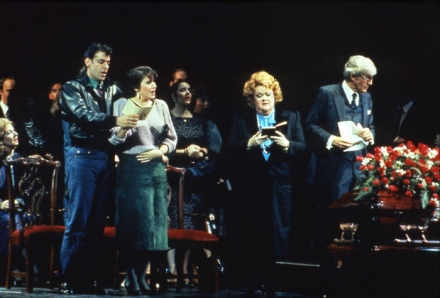 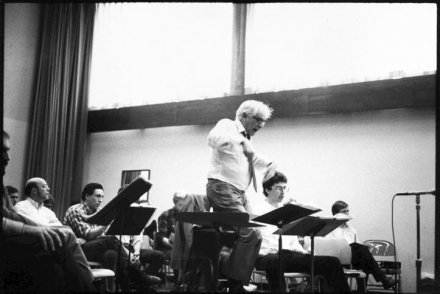 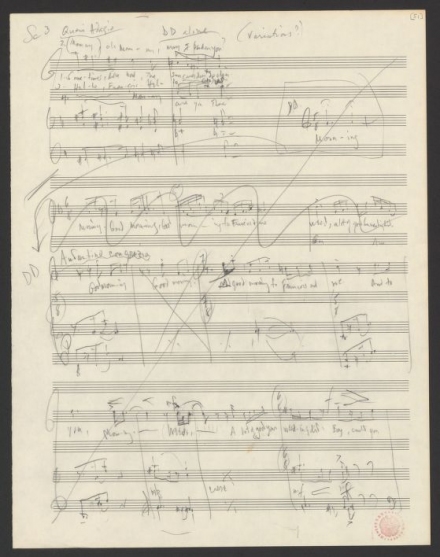 Bernstein: A Quiet Place - "The One and Only Cereal" / Bernstein • ORF Symphonie Orchester

Trio from Act I