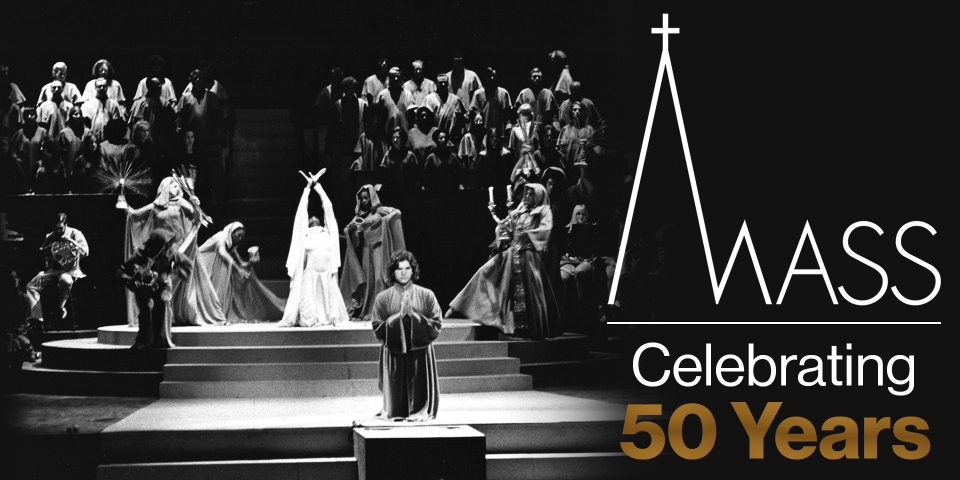 On September 8, 1971, the inauguration audience for the brand-new John F. Kennedy Center for the Performing Arts experienced the world premiere of Leonard Bernstein's MASS: A Theatre Piece for Singers, Players and Dancers.

As the concluding event of the Kennedy Center’s 50th Anniversary celebration, Leonard Bernstein’s MASS returns September 15-18, 2022. Directed by Alison Moritz and choreographed by Hope Boykin, this monumental work will be re-staged in the Concert Hall and feature the National Symphony Orchestra and conductor James Gaffigan along with 2020 Marian Anderson Award winner Will Liverman as the Celebrant. More info

In addition, Sony Classical celebrated MASS’s half-century mark by releasing the original recording of the work, conducted by Bernstein himself. In collaboration with the Leonard Bernstein Office, this remastered 2-CD plus hard cover book edition will include numerous photos and facsimiles, the full text, and new liner notes by music journalist Edward Seckerson.

The broad spectrum of reactions to the premiere of MASS were an apt mirror of the political and social unrest of that era. Audiences either embraced or bristled at the work’s unabashed anti-war message; critics were divided about the work’s exuberant eclecticism; and the Roman Catholic Church withheld its approval – some cities, under pressure from their local diocese, even cancelled planned performances.

Five decades later, MASS is no longer seen as controversial, but as a visionary, prescient work, embraced by presenters, artists, and audiences worldwide. Even the Catholic Church came around: in 2000, Pope John Paul II requested a performance of MASS, which took place in the Vatican amid a sea of red-robed bishops.

Musical theater lyricist and composer Stephen Schwartz, who collaborated with Bernstein on the lyrics in MASS, recently said, "Working with Leonard Bernstein on MASS was one of the most exciting experiences of my professional life, and I learned so much from my collaboration with him. I am delighted with how surprisingly well the piece has aged, and I continue to be proud of having been able to contribute to it."

BRIEF BACKGROUND
Commissioned by Jacqueline Kennedy Onassis for the opening of the Kennedy Center, Bernstein chose to base the work on the liturgy of the Roman Catholic Tridentine Mass, to honor and memorialize the Center’s namesake, who was the nation’s first Roman Catholic president. Bernstein, with lyricist Stephen Schwartz, envisioned the piece as an exuberant, fully staged dramatic pageant. The work mixes sacred and secular texts, using the traditional Latin liturgical sequence as the framework, and inserting contemporary English lyrics that question and challenge the prescribed service. Bernstein’s score combines elements of musical theater, jazz, gospel, folk, and rock music, while also employing a rich symphonic palette that ranges from 12-tone serialism to subtle quotations from Beethoven’s Ninth.

The opening performance of MASS in the Opera House -- directed by Gordon Davidson, conducted by Maurice Peress, and choreographed by Alvin Ailey -- featured over 200 participants. In addition to the large pit orchestra, Bernstein’s work featured two choruses, a boys’ choir, a Broadway-flavored “Street Chorus,” Ailey’s dance company, a marching band, a rock band – and the work’s protagonist, the Celebrant.

The Vietnam War – as well as the shadow of the Holocaust, the Cold War era’s threat of nuclear annihilation, and the ongoing struggle for civil rights – were all very much on Bernstein’s mind as he composed MASS. The work expresses the composer’s deepest personal doubts about the institutions of government and religion, and questions his own spiritual beliefs -- but ultimately serves, according to the composer in a 1971 program note, as a “reaffirmation of faith.”

The Nixon Administration had multiple reasons for being reluctant to celebrate the opening of the Kennedy Center. The President’s advisors eventually talked him out of attending the opening, telling him there was a “secret message” hidden in the Latin text, deliberately inserted to embarrass the President. The line was merely “Dona nobis pacem” (‘Grant us peace’), from the standard liturgical text.

Dropbox Electronic Press Kit Including Photos, Bios, and Other Resources

Alan Titus (Celebrant) and members of the Alvin Ailey Dance Company in the original production of Leonard Bernstein's MASS, 1971.