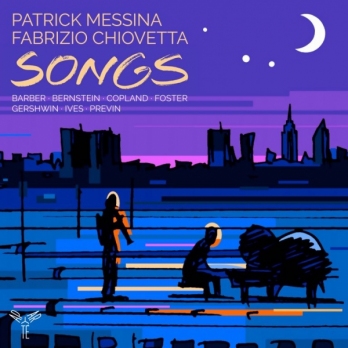 Patrick Messina and Fabrizio Chiovetta embark for America, this promised land of which they draw a musical portrait through the ages, from its deep roots to its recent outbursts. Traditional melodies intersect with jazz, roam Broadway, embrace the avant-garde ... From Charles Ives to André Previn via Gershwin and Bernstein, Patrick Messina and Fabrizio Chiovetta deliver here the essence of American music.

Patrick Messina is well known to orchestras and audiences as one of the leading clarinetists of our times. In 2003 Patrick Messina became Principal Clarinet of the Orchestre National de France under Kurt Masur’s direction. He has performed with several of the world’s top orchestras and conductors, both as guest Principal clarinetists and soloist, as well as in some of the most prestigious festivals. Messina is also an avid chamber musician and maintains positions as a Visiting Professor at the Royal Academy of Music in London and Professor at the Ecole Normale Cortot in Paris.

After winning an impressive range of prizes during the first years of his career, Swiss pianist Fabrizio Chiovetta has issued a series of critically acclaimed recordings.His soloist appearances have taken him across Europe, Middle-East, North America, and Asia. He is also much sought-after as a chamber musician. In 2009, Chiovetta released a recital of Schumann piano works on the Palexa label that earned raves in both Europe and the U.S., and he was signed to Switzerland's Claves label. His talent as an improviser has led him to work with artists of varied backgrounds. He currently teaches piano at the Geneva University of Music.