From the Charles Eliot Norton Lectures, presented with the Boston Symphony Orchestra and the Vienna Philharmonic Orchestra. This lecture was broadcast on 18 January 1976 on PBS. Original lectures took place in 1973.

To save time, let's limit ourselves to extrapolating our deep structure from one point of view only, that of symmetry. The reason I pick symmetry as our starting point is that it is a universal concept, based on our innate symmetrical instincts, which arise from the very structure of our bodies. We are symmetrically constituted, dualistically constituted, in the systole and diastole of our heartbeats, the left-rightness of our walking, the in-and-outness of our breathing, in our maleness and femaleness. This dualism invades our whole life, on all levels; in our actions (preparation/attack, tension/release) and in our thinking (Good and Evil, Yin and Yang, Lingam and Yoni, progress and reaction). And all these find musical expression in such oppositions as downbeat versus upbeat, half note versus quarter note, and especially in the elementary musical structure principle of 2+2=4, 4+4=8, 8+8=16, et cetera ad infinitum. That's why the clue to our deep-structure project is to be found in the highly symmetrical formation of Mozart's main theme.

The theme begins with the chain we've already discovered.

And this phrase, which is two bars long, is immediately countered, or answered, or mirrored if you will, by a complementary two-bar phrase.

Thus producing a symmetrical four-bar structure. But this double phrase is clearly incomplete, and so we find it followed by its counterpart—another four-bar phrase which is reducible to a similar pair of two-bar prhases.

The theme is now balanced, as you can see in the accompanying diagram, but as you can hear it's still incomplete. 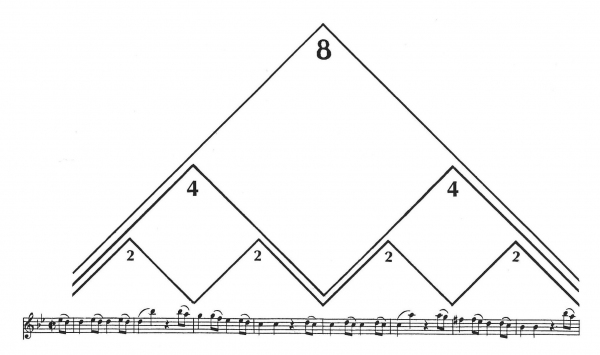 But even incomplete those eight bars present the main material: four symmetrical strings of two-bar phrases, perfectly balanced, and comprising in themselves a string of dualities: two within four within eight.

Now from this point on we're inventing—just as we did with the Shakespeare line—dreaming up a prose structure based on the absolute symmetry of these eight bars of music. If we really stick to that symmetrical principal, the introductor vamp-accompanimnet preceding the theme should also be eight bars long, or at least four, or at the very least two. And in the same way the new material following the eight-bar melody should also proceed in sections of four or eight bars each, always in multiples of two, always aiming at the absolute symmetry posed by the theme itself. Of course we know that Mozart did nothing of the sort. But I have. I have been secretly working out an extrapolatin on my own, and I have come up with something that could be construed as a prose equivalent of the first twenty-one bars of Mozart's symphony. It happens to be thirty-six bars long, as might be expected of a deep structure; just as the single Shakespeare line produced a substructural sentence of forty-odd words. And if I were more pedantic (and more cruel), I could have made this musical deep structure even longer. In any case, here it is, a perfect nightmare of symmetry. 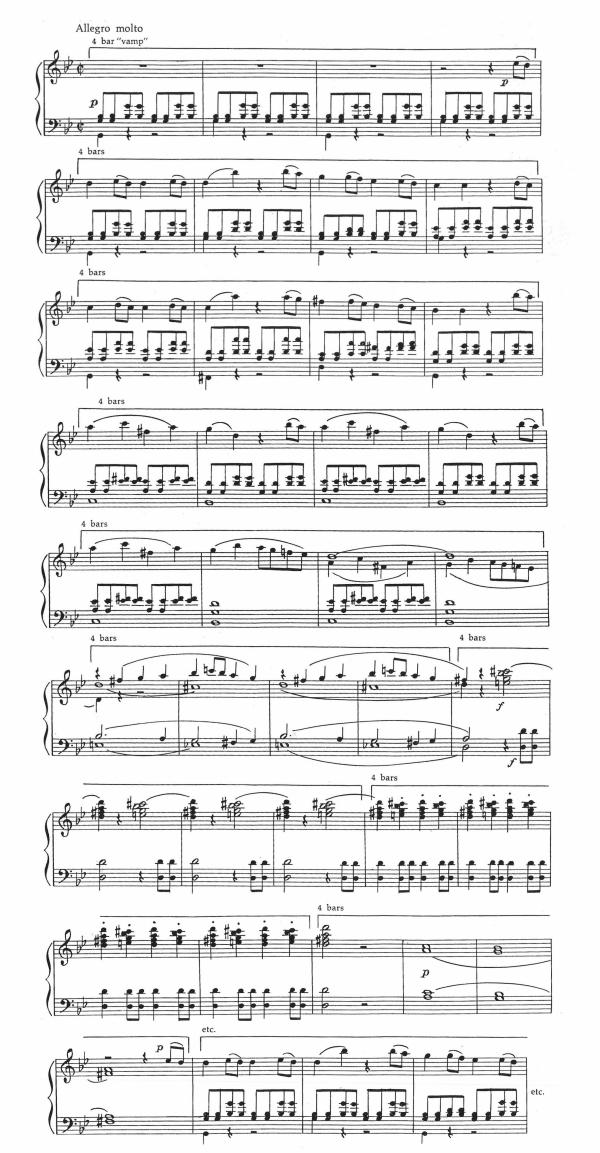 And once again, we're back in our principal theme. But what a drag it's been to get there: so much academicism, so many unnecessary schoolboy repeats, such a lack of deletion. This is "prose," or else music by a bad composer. It's stalling for time, the way people do while they're thinking of an answer to a question. "Uh, how old is Mildred?" "Oh, Mildred—must be—uh—Mildred is 69."

Of course my musical repeats were made in the name of symmetry. But symmetry is not necessarily balance: that's a precept we all learned long ago, and it's worth saying again. What Mozart has done—as any great master does—is to make the leap from prosy symmetry into poetic balance, that is, into art.

[The entire script is published in the book "The Unanswered Question: Six Talks at Harvard"]

To purchase the DVD Box Set of the Norton Lectures, visit our store.

Amazon The Unanswered Question - Six Talks at Harvard Buy the DVD Box Set Back to Norton Lecture Directory
Come On, Deliver...
the latest Leonard Bernstein news... to me!