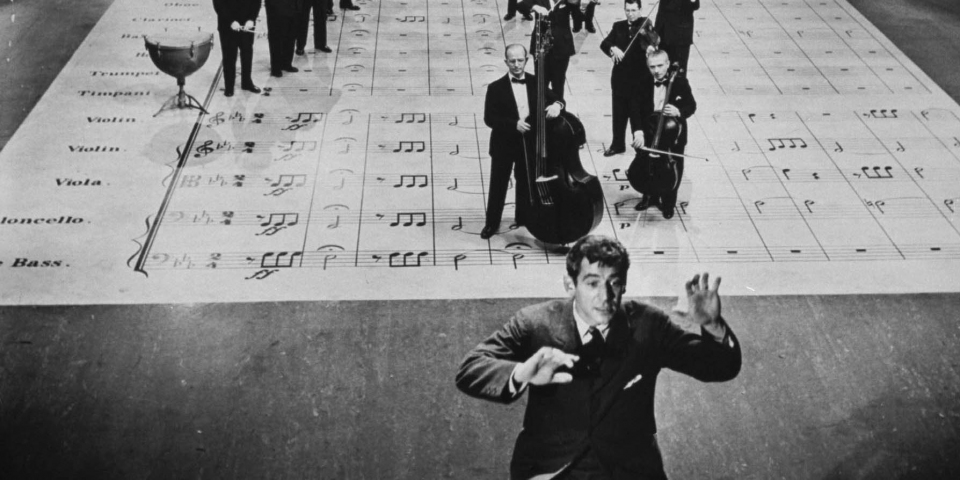 On November 14, 1954—the eleventh anniversary of his surprise, nationally-broadcast debut conducting the New York Philharmonic—Leonard Bernstein made his first television appearance as a music educator on the CBS Television Networks's Omnibus, a weekly culture-oriented program funded by the Ford Foundation. While less celebrated in the press than that momentous concert event, this broadcast launched a new and significant facet of Bernstein's career.

At the suggestion of the show's producers, Bernstein put together a program about the genesis of Beethoven's Fifth Symphony using sketches discarded by the composer. The scholarly nature of this material could have been impossibly bookish and was something of a gamble for the mass medium of television. Bernstein, however, made the subject seem vivid and vital through his clear, unprententious writing and clever metaphors.

The floor of the television studio had been painted with a huge blow-up of the first page of Beethoven's score. Bernstein had the musicians stand on the lines of music representing their parts to illustrate, visually as well as aurally, the changing colors of Beethoven's orchestration.

Bernstein focused on what he saw as Beethoven's "bloody...inner battle" to create a work of inevitability and "rightness." He showed pages from the composers sketchbook, pointing out Beethoven's messy penmanship and the many scratched-over revisions, using Stravinsky's neat and precise manuscript style as a comparison.He compared the reality of Beethoven's struggle with the Hollywood image of a composer: someone who is hit by inspiration and writes effortlessly, like James Cagney's portrayal of George M. Cohan in Yankee Doodle Dandy.

The program was widely acclaimed as a model for quality, educational television programming. Over the next few decades, through more Omnibus programs and the many Young People's Concerts, Bernstein set the standard for effective music education, not only on television, but in the classroom as well.

The impact made by Bernstein's first Omnibus program is reflected in the many fan letters he received. Each letter has a distinct flavor, reflecting the diversity of the television audience.

Compare this letter from a mother in California with the letter from the student at Yale University, below.

I'm not the person to write fan letters but after your appearance on Omnibus yesterday, I felt this is one letter I must write.

I have never enjoyed t.v. in the five years we have had a set, until yesterday.

Your dissertation [sic] of Beethoven's Fifth brought me back to the old days of Frederick Stock & the children's concerts in Chicago. Stock would always interrupt a symphony to explain one passage.

I don't see why you, or someone like you couldn't do a music appreciation program on the t.v. for all of us who are starved for the classics & would like to know more about the composers & the music.

...Even something for children. I know my children aren't getting the chance at concerts that I had. We are to [sic] far away from town to take them to concerts & I don't drive.

The children of today will grow up to be cowboy morons if some of the finer things don't come thru the t.v. screen soon.

Our seven year old son watched you yesterday and loved every second of it. Just think what a steady diet of music, good music, would do for these children.

Robert Saudek was the producer for CBS's Omnibus. Following Bernstein's first appearance on the program, Saudek wrote to congratulate the conductor on his success.

The returns are in and you have been elected by a landslide. It has been sometime since we have received such an amount of mail for a feature on OMNIBUS, and every single letter and telegram has been wildly enthusiastic.

Many thanks for all you did. I hope you feel like going on again before the season is over. We all enjoyed this association and hope you did.

Congratulations and all best wishes.

The power of Bernstein's Omnibus program on Beethoven was felt by people of different backgrounds and levels of musical knowledge and experience. This letter, written by a young man presumably at Yale University, provides a sharp contrast to the letter from a mother in California, above.

Thank you for an imaginative, informative, and stimulating period of musical education which you gave us on today's Omnibus. Your delightful 40 minutes of commentary present [sic] a considerably stronger argument than the volumes of testimony heretofore presented in favor of educational television.

I'm sorry to say that I am not one of those who feel that we can "bring culture" to the masses even through so all-pervasive a medium as television. However, I do believe that the mass[es] can be made more tolerant of other people's tastes through such activities, and also that persons with the ability to gain from artistic and musical experience may be given such experiences who might otherwise never have the opportunity to gain them.

Now that you have "broken the ice" in meaningful music education via t.v., I'd like to ask you to work in favor of making your effort the first of a series, and also toward discovery of less familiar modern works which, like your music, are living intensifications of contemporary experience—rather than endlessly repeated works of the past as important as they are to a full understanding of your art.

...Once again I should like to congratulate you on your superb television performance...

Film legends Humphrey Bogart and Lauren Bacall were friends of the Bernsteins. Bogart saw one of the conductor's later Omnibus programs and sent this telegram from Los Angeles. (The "Betty" Bogart mentions is Bacall, his wife; Betty Perske was her given name.)

IF MY HAT HAD NOT BEEN BLOWN OFF YEARS AGO, I WOULD TAKE IT OFF TO YOU. BETTY, WHO STILL HAS A HAT, THROWS HERS IN THE AIR. JUST WONDERFUL.

The excitement generated by Bernstein's first Omnibus telecast is reflected in the broad coverage the program received. Life, one of the most popular national magazines of the time, took an entire page to cover the story in their November 29, 1954 issue.

"The gigantic struggle of Ludwig van Beethoven in composing his celebrated Fifth Symphony in 1805 was made ingeniously vivid last week on Omnibus...."

Jay Nelson Tuck, who wrote the "On the Air" column for The New York Post, was generally critical of CBS's Omnibus. He was impressed with Bernstein's presentation, however, though he found fault with Bernstein's very physical conducting style.

... [The] program presented three films, none of which advanced TV programming in the smallest degree, and an enormously interesting live experiment in the understanding of music.

... [Bernstein's presentation] was clear, concise and fascinating to a young man of nine as well as to his elders. I wish someone would give Bernstein a regular program of this kind.

When it came to the straight playing of the music [Bernstein's conducting of the complete movement at the end of the program], however, Omnibus fell down again. There was no originality or thoughtfulness in the camera work that accompanied the music, and Bernstein's physical antics on the podium were a serious distraction. ...

Howard Taubman raved about Bernstein's first Omnibus program in the Sunday The New York Times on November 21, 1954. The revolutionary nature of the program is made clear in Taubman's assessment, and he credits Bernstein for its success. The headline reads: "Touch of Class on TV: Music Rarely Fares Well, But It Did With Bernstein."

Television does so little with and for good music that one expects almost nothing of quality from it.

...Some executives in the television field [use the] excuse... that it is nearly impossible to do anything worthwhile with music, especially instrumental music, on the home screen. If this is their out, they are wrong. In the last few weeks this observer has caught several shows that prove it can be done—and very well, indeed.

A brilliant example occurred on Omnibus last Sunday when about a half hour of the program's time... was turned over to Leonard Bernstein.

...Credit for an absorbing and adult half-hour belongs largely to Mr. Bernstein... It was Mr. Bernstein's idea to illustrate in purely musical terms how Beethoven struggled to build his symphony.

...Mr. Bernstein spoke simply, cogently and without condescension or artiness as he made his points.

...As Mr. Bernstein went along with [his] illustrations, he made vividly clear how Beethoven fought his way to the right phrase. He gave his audience an insight into the mind of a creative thinker. Without resorting to the rhetorical flourishes so common to discussion of good music on the airwaves, he showed what a tremendous adventure a symphony can be.

© 1954 The New York Times Company. Reprinted by permission. Except for one time personal use, no part of any New York Times material may be reproduced by any mechanical, photographic, electronic process, or in the form of phonographic recording, nor may it be stored in a retrieval system, transmitted or otherwise copied for public or private use without written permission of the New York Times Permission Department.

Perhaps the most flamboyant rave review of Bernstein's first Omnibus program was by Paul Speegle in The San Francisco News. Speegle noted how the quality of Bernstein's lecture-concert made most other television programming seem uninspired. The fanciful headline (referring to a nursery rhyme) reads: "TV's Like 'Little Girl With Curl': Sublime if Good, Horrid if Bad."

The 'sublime' took place on Omnibus ... when Leonard Bernstein, one of the more promising figures in American Music (and the world, too--what the heck, if the Russians can embrace the universe, so can I!), stepped before the cameras to dissect the first movement of Beethoven's 'Fifth Symphony.'

Perhaps 'sublime' is too grand a superlative to use in this connection, but if some enterprising TV producer doesn't 'con' Mr. Bernstein into a TV series he's missing one of the more electrifying personalities of our time.

In the first place, Mr. Bernstein looks like a young [Abraham] Lincoln ...and then when he proceeds to talk in a resonant, magnificently modulated voice, using the English language as she should be used but so often isn't, the warmth he generates makes itself felt in the homes on either side of your own.

Even if your musical knowledge only extends as far back as 'Three Little Fishies' and Beethoven is the name of a neighbor's canary, Mr. Bernstein's feeling for the dramatic; the grace and flow of his gestures; his sense of the fitness of things would make you sit up and take notice, no matter what the situation.

If he never makes another TV appearance this year, his one performance last Sunday stands out as one of the finest of the season.