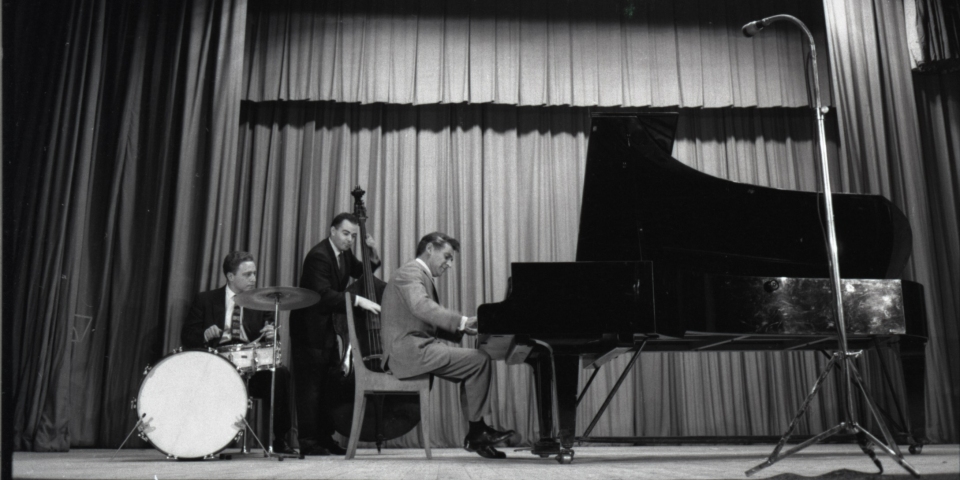 Photo by Don Hunstein, Leonard Bernstein and members of the New York Philharmonic on stage in Moscow, 1959; Courtesy of Sony Classical

"Jazz is the ultimate common denominator of the American musical style."
–Leonard Bernstein

From his earliest years, jazz was an integral part of Bernstein’s life, and it made a crucial impact on his own music.

As a teenager in the 1930s, he put together a jazz band, was famous for his jazz piano playing at parties, and directed a swing band at summer camp. Some of the jazz-inflected music he composed in the mid-1930s at Harvard, and later at Curtis, provided source material for future works. Perhaps most significantly, his undergraduate thesis was no less than an assertion that jazz is the universal basis of American composition. In New York soon after college, he got to know jazz intimately, by day transcribing for publication the improvisations of legendary players like Coleman Hawkins, and playing piano in jazz clubs at night.

Bernstein’s works abound with jazz influences and rhythms. His score for clarinet solo and jazz ensemble, Prelude, Fugue and Riffs (1949), was commissioned for Woody Herman’s jazz band. In the same year, a movement of his Symphony No. 2: The Age of Anxiety, was written for solo jazz piano and percussion. These and other compositions, from the Serenade after Plato’s Symposium to Touches, have been recorded by major jazz artists. Jazz had a deep impact on Bernstein, and in return, Bernstein, through his compositions, as a performer, and as a teacher, helped to legitimize its influence on classical music.

Back to Composer SFJazz - On the Corner | Rusty Aceves The Leonard Bernstein Jazz Connection All About Jazz - Jazz at 100 Today | Russell Perry The Legacy Of Leonard Bernstein: Policastro, Sanabria, Nash, Moran, Bloom An exploration of jazz responses to the Maestro.